skip to main | skip to sidebar

SACRED COW AND THE CONSTRUCTION OF HINDU NATIONALITY IN BRITISH INDIA 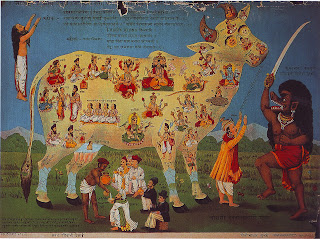 The production of cultural meanings and social practices fosters the historical formation of national identities. Religion is one of the principal purveyors in this custom. Mass produced religious images in British India had a wider implication in the construction of Hindu nationality. Many of these images had explicitly anti-British political agendas. One of such images is a popular painting with theme 'Chaurasi Devata Auvali Gay (the cow with eighty four deities). The image was produced in Raja Ravi Varma Press in c.1912.

Cow has been sacred to Hindus since the remote past. However, other religious communities like Muslims and Christians don't consider cow as sacred. Robinson writes: Hindus revere the cow, whereas Muslims eat it. Worse the latter are butchers by protection and sacrifice (qurbani) cows at the times of certain religious festivals, namely during Bakhr – Id which commemorates the sacrifice made by Abraham. Dayanand Saraswati, the founder of the Arya Samaj, had formed Gaurakshini Sabha (Cow protection association) in 1882 and published a book. The purpose was to rouse Hindu feeling against Christian and Muslims on account of killing of cows, and to present a monster petition to Government, begging that the practice might be prohibited.

The cow, an enormously potent and sacred sign, was to emerge as a symbol of the nation and these visual symbols were to play a vital role in the organization as well as the ideology of the cow protection movement. In numerous lithographs, cow became a proto-nation, a space that embodied a Hindu cosmology. In most of these visuals the cow encompassed all the gods, but was also depicted as succoring all the diversity of India's communities. The political message that was spread through these images was to represent a Hindu identity and nationality that required protection from non-Hindus.

The movement for cow protection corresponded to a mobilization which reflected a multiplicity of interests, both economic and political. It covered a diversity of urban ruler and rural actors, maharajas or minor government officials, large land owners or landless peasants, traditionalists, reformists or agitators for independence. Its development responded to the need for unity of a Hindu community, which its organizers found excessively fragmented.

In the district of Azamgarh, in the 1890s, the organizers of a gathering of 600 persons had circulated the imposing image of a cow, the body of which contained (nearly) all the gods of Hinduism. Placing various ritual implements before this image, the sacrificer exhorted the participants to protect the cow. Everyone present received a little milk, but only after a calf had been satisfied. After the milk had been drunk, the cow was solemnly proclaimed 'universal mother'. It was declared that the killer of a cow was matricide. A new image reinforced this idea: it represented a cow flanked by a Muslim drawing a sword.

The Ravi Varma painting shown here was visualized to convey these images. Hindus, a Parsee, a European and a Muslim are accepting milk from the milkman with the slogan 'drink milk and protect the cow'.
Posted by History Speaks at 5:59 AM

Perhaps no other city has made such significant contribution towards women empowerment and education. As you walk past the exquisite architectural wonders of Ahmedabad, you will come across the amalgamation of varied cultures: the Juma Masjid, for instance: it was the first in the world to allow women to pray at a mosque.

I asked a young man in a ghetto in Agra if he had ever seen the Taj Mahal. "Taj Mahal?" he said. "I haven't seen it, but yes, I have heard of it. It is in Delhi."

Sufism which brought Hindu and Muslims together

Islam in India was spread much less by the sword then by the Sufis. After all Sufism with its holy men, visions and miracles, and its emphasis on indivisual search for union with god, has always borne remarkable similaraities to the mystrical side of Hinduism.Under Sufi influence it was particularly at the level of village folk worship that the two religions fused into one, with many ordinary Hindus visting the graves of Sufi Pirs, while Muslim villagers would leave offering at temples to ensure the birth of children and good harvests.

Ghalib wrote praising Benaras as the Mecca of India saying that he could "renounce the faith, take the Hindu rosary in hand, and tie a sacred thread around my waist".